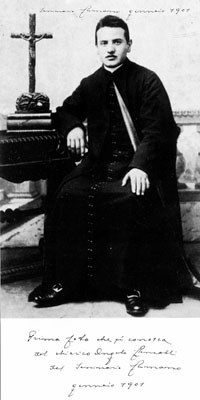 In 1892, at the age of 11, Angelo entered the Bergamo seminary for high school and high school studies thanks also to the financial help of his parish priest don Francesco Rebuzzini and of don Giovanni Morlani, owner of the fund cultivated by the Roncalli. Here he developed the determination to make every effort to become a saint as we repeatedly read in his diary "Journal of the soul" which he began writing in 1895. Given his intellectual and moral abilities in 1901 he was sent to Rome to continue his studies as a student of the Roman Seminary of Apollinare, taking advantage of a scholarship. In an atmosphere of openness and new cultural settings, the intellectual training given by the Roman seminary says: "it gave discreet wings to our youth and encouraged broad horizons".

In the years 1901-02 he applied for military service, sacrificing himself in favor of his brother Zaverio who was necessary at home for work in the fields. It was a real purgatory "and yet - he wrote - I feel the Lord with his holy providence near me". He graduated in Sacred Theology in 1904.